This weekend highlighted the absolute importance of backup generators in both homes and businesses when two major power stations failed almost simultaneously on Friday evening, causing power cuts up and down the country. Just two minutes apart, Little Barford and Hornsea wind farm shut down, taking the National Grid by surprise.

As a consequence of the power station failures, automated systems took over, shutting off electricity supply to certain areas of the country. This happens for safety reasons. The National Grid is supposed to maintain an electrical frequency of 54 Hz however when the electricity supply can no longer meet the demand, the frequency drops. On Friday, the frequency dropped to 48.9Hz which Is significantly lower than the permitted level.

Despite the relatively short period of down time, power stations were rebooted and running 15 minutes later, the consequences were far from short lived.  BBC News reported 1 million people in total were affected by the power cut, up and down the country, touching transport, businesses and homes. Northern Power Grid customers suffered the consequences, with 110,000 people losing power, as well as 26,000 customers in the North West. Repercussions hit as far as Wales, with 44,500 Western Power Distribution customers experiencing total blackouts too. The last time an outage of this scale took place was in 2008 however power cuts can take place at any time, regardless of conditions. A diesel generator is an investment that will protect your home or business in circumstances like these, preventing economic losses, but more importantly, a reliable diesel generator like those manufactured at YorPower reinforce the safety of your home/ business.

The highest impact was without question to the transport systems all over the UK.  The consequences were felt by national rail and London tube passengers due to signalling systems not working and major systems failures, as well as road travellers due to traffic light failure. Newcastle airport was also reported to have been plunged into darkness, causing flight delays – less than ideal on an August weekend.

Here at YorPower, we often underline the importance of backup generators in hospital – this weekend was a perfect example when vital systems at Ipswich hospitals shut down as result of the power outage. Reports indicate this was due to the failure of a backup generator, some reports state that it was due to a circuit breaker. In any cases, this highlights the importance of regular maintenance checks and servicing. Our sister company, PPS Power, who specialise in generator & UPS maintenance, ensure that situations like this are prevented – ensuring safety at all times.

The National Grid operations director, Duncan Burt, concluded that Friday’s power cut was a “very rare event,” however, with such calamitous possible consequences – backup power systems are essential. A reliable diesel generator provides peace of mind and serious damage prevention, no matter the scale of a power cut. Protect your home/ business and contact us today. 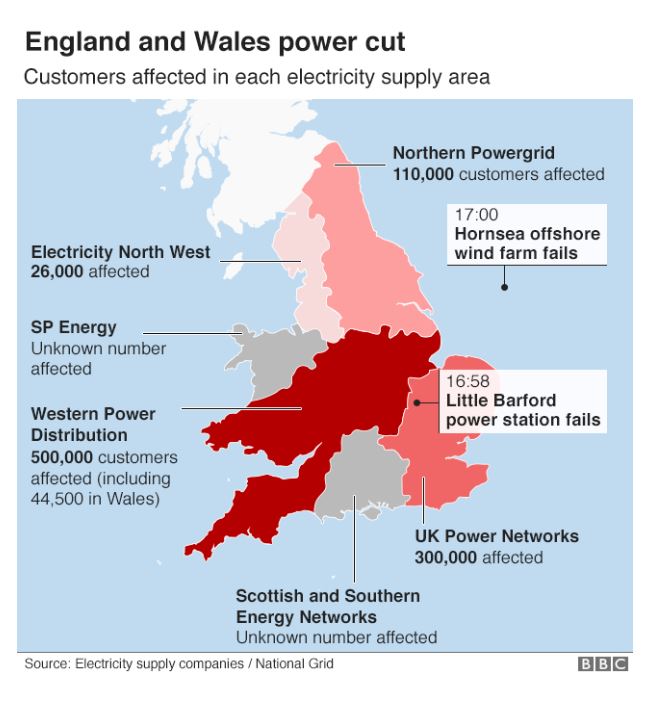